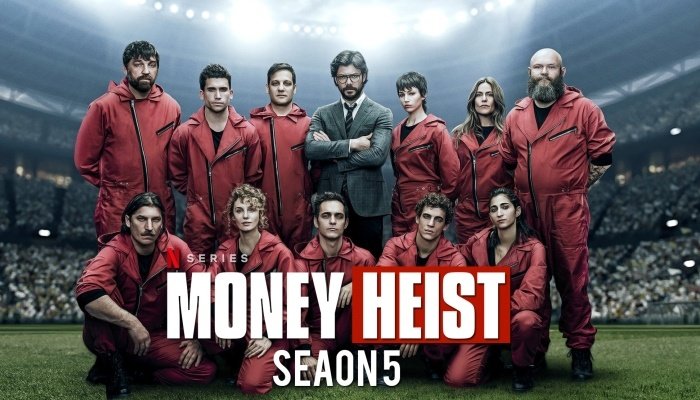 La casa de Papel( the house of paper) later translates to money heist, becomes the most popular non-English television drama series over Netflix.  This Spanish heist series turned the world’s eyes by recording more than 65 million streaming of the last season on Netflix. Here in this article we will review about upcoming Money Heist season 5

The international Emmy award winner for best drama series is now, ready to set the stage on fire with its new release of Money Heist season 5. This season will be the final heist for these eight robbers, as stated by the creator Alex Pina.

This is the popularity of this heist series that people start learning the Spanish language to understand it better. The characters made a strong presence on follower’s minds with their unique names inspired by famous cities. In many protests, protesters used their artistic masks against the government in different countries. Takes place in – royal mint of Spain, other on the bank of Spain.

Additionally Netflix announcement in September 2021 that this money heist season 5 will be the final one,  left every heist lover with mixed feelings.

When will money heist season 5 release?

According to Alex pina( The creator). – “ the war reaches its most extreme and savage levels, but it is also the most epic and exciting season.”

What do we get from the money heist season 5 teaser release?

The power-packed teaser gives a glimpse of direct fights, handed with guns, weapons to indicate the final war of these Robbin hood robbers.  Netflix also dropped six photos on June 3 as the first look of money heist season 5. It reflects the extreme drama and the end, as the professor is at gunpoint by Sierra.

The popularity of this series constrains the makers to think about future spinoffs as hinted by the creator Alex pina.

Money heist cast: some new addition to the heist game

Season 5 of this Vancouver media’s hit series has some new additions also.

The initial parts have a team of eight robbers, three of them died by the end of the first robbery- Berlin, Moscow, and Oslo. However, because of the immense popularity of Berlin, makers decided to bring back him in flashbacks of season 3.

Is This Going to be the Reunion of all the Gang Members?

According to the money heist followers that this ending season can have a farewell reunion of all the heist members too. Their strong presence made this last season a rabble-rouser.

Here are the quick specifications of the benevolent robbers and team:-

Which money heist character are you?

This money heist series was formerly a television show of 15 episodes. Which was originally telecasted on the Spanish network Antena 3 in 2017. It gains its popularity when Netflix acquired it and transformed the whole heist series into 22 episodes. Netflix released it with a bang globally, without pre-realization of its success.

Its originality, strong characters, and rebellious story against government norms strongly connect with viewers and become the most viewed web series in a trice.

The characters of the heist game have become the inspiration for many. Team of robbers and even the villains gain overnight popularity with massive fondness.

Nairobi, Denver, Rio, Berlin everyone has firmness in their roles. But the team leader, the mastermind  Alvaro Morte’s character the professor behind every planning is the game-changer of this glorious journey of robbers.

Whenever it is surveyed globally, to know the audience, interest that Which money heist character are you? Or the one whom you inspired the most?

The professor’s role is the conventional choice as his intelligence and planning are remarkable. He is the core planner and chooses the best robbers for his unbeatable team. His in-depth research, deep knowledge, and always have a side plane, execute the whole robbery successfully.

How does money heist end?

“ It’s always better to leave sooner rather than later.” Quoted Alex pina. Ending the most loved show is not easy for its makers as they have hinted at some spinoffs as future installments.

As quoted by Netflix “The Heist comes to an end”, taken as a hint by heist lovers that the heist end, not the series.

There are predictions that this season 5 of money heist is going to end in the bank robbery in Spain with lots of action and drama.

Jesus concluded, “ it is very different from all the previous seasons and we have put all our eggs in one basket to go out with a bang”.

Money Heist ( La casa de papel) is the journey of the biggest robbery of its time. Despite a criminal event, people feel a strong connection with these eight robbers.

The main motto of this whole heist season is depending on these five pillars:-

The core training of 5 months given by the professor before the royal mint robbery shows the preparation and planning. It has everything to learn as a business skill.

The training, coordination of members, visual communication, mutual understanding, goal setting, proper research,  the role of leader, and its commendable leadership and self-control. This heist series has everything to influence human behavior and self-development.

Just to wrap up all, this money heist series is a must-watch web program. The upcoming season gets everyone’s attention before its release. Even when the shooting started in Madrid Spain, the leaked photographs from unknown sources were covered by every media. The followers are getting mad to see their heroes in money heist season 5. The social media postings of actors, Vancouver media house, and Netflix announcements mesmerize everyone for a year now.

Every announcement of When is money heist coming back? Leaves them in great elation. A teaser is out with perfect suspense and with a release date. The teasing game between makers, organizers, and the heist lovers is on peak till the money heist season 5 will release.

The mixed feelings of la casa de papel followers have another extent because it is announced to be the last heist by Netflix.  With Season 5 release the makers will take off- air this Spanish drama.

Now, wait for the last heist and look what happens in the bank of Spain with these eight heisters.  Will this money heist end ? or do makers have something else to surprise us later?