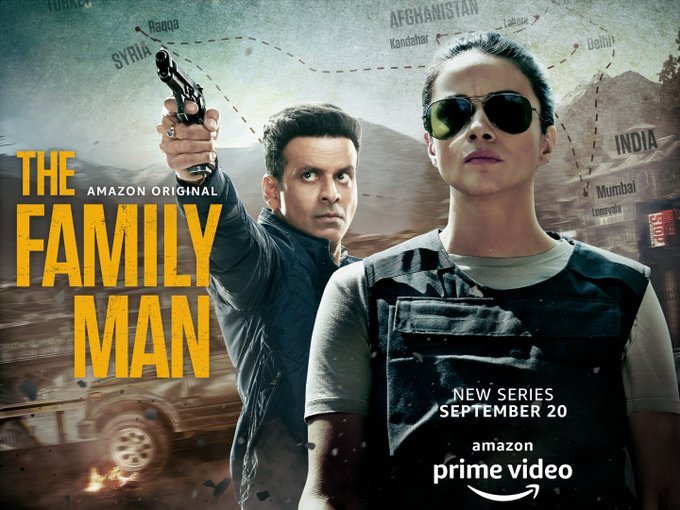 Amazon Prime Video is presenting a “The Family Man” an Indian fictional Drama web television series. Directed by Raj Nidimoru and Krishna D.K. and Manoj Bajpayee and Priyamani are the lead roles of series.  It is the story of a middle-class family man, who is secretly working for the National Investigation Agency (NIA). Series was presented at Television Critics Association’s summer press tour held in Los Angeles in July the series was revealed in June 2018 and released in September 2019 on Amazon Prime Video.

This series takes you in the world of Srikant Tiwari, acted perfectly by Manoj Bajpayee. Srikant Tiwari is a secret spy in a National Investigation Agency, apart from it he was a dad hustling with her teenage daughter, and how he managed his married life from 15 years. Along with all these family problems he is stuck in the configuration of home loan and at the same time, he breaks the code of an impending terror threat.

The show started in the serene blue waters of the Arabian Sea where the Coast Guard arrested the boat. Then they meet with some former ISIS recruits who are collecting the evidence which is pointing towards an impending terror attack on India. In the collecting and finding the evidence the cat and mouse chase begin and this rush takes them to the Kashmir, Quetta, Balochistan and then New Delhi.

In the show “The Family Man” director takes us to the current situation and happening of the international and national geopolitical system. The tagline of the show is inspired by ‘Daily News Stories’. This show will let you know about the present happening around us, Gaurakshaks, murders, beef controversy. The writer of the show might be influenced with the things and he has proved it with his logical narrative.

The dialogue delivery of Manoj Bajpayee and Sharib Hashmi is outstanding in the show, appreciate the dialogue writer Sumitra Arora who has made such intense and conversational topics not moralize. Dialogue like ‘Privacy like democracy is a myth’, says by greedy Talpade(Hashmi).

It is interesting to see hero clashes with the new world where he can’t be a cool dad of his kids and his ‘Sarkari Naukri’ is a synonym of being a loser. As we all know our bad guy Manoj Bajpayee but in this show, we can also see his refreshing role. If you want to know more about the Srikant Tiwari – what hustle oh his daughter was? How he reaches in TASC? How he ended his married life? Does he secures his home loan or not?