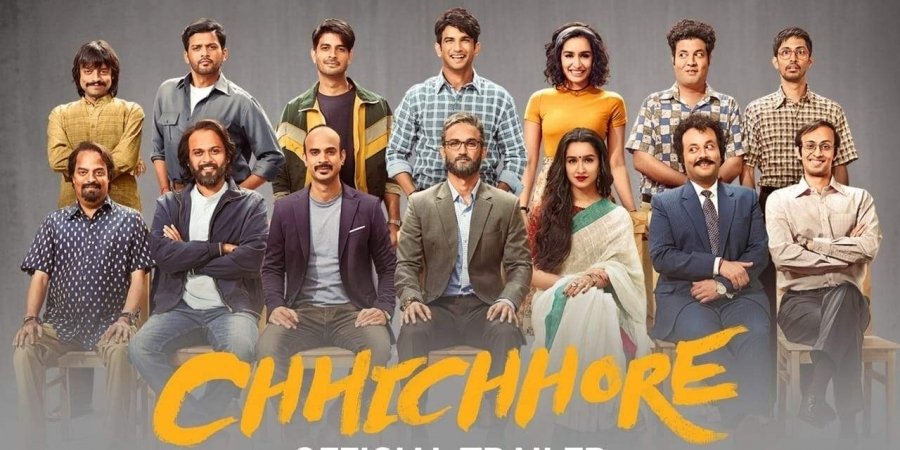 Chhichhore Movie Review. Directed by Nitesh Tiwari, the film casts Sushant Singh Rajput, Shraddha Kapoor, Varun Sharma,  Tahir Raj Bhasin, Prateik Babbar, Naveen Polishetty, Tushar Pandey. Tiwari, of ‘Dangal’ fame, taps into the audience’s predilection for nostalgia. Granted, that would appeal only to people in their 30s and 40s, but it cannot be gainsaid that even younger audiences will lap up this trip. Structurally, the film imbibes the hankering that many have towards a younger time in their lives when hostel life engrossed everyone’s attention.

This yearning the film tries its best to exude, and succeeds – but only to a limited extent. One has definitely to have been impressed by Tiwari’s repertoire, in order to express some semblance of generosity in his favor. He does try to keep the plot engaging. The best thing is to enter the halls with an open mind – if one is looking for entertainment, one will find it.

There is a reliance on flashbacks – old folks recalling their youth. Prosthetic make-up on the cast is part and parcel of the film, structurally. However, in Shraddha Kapoor’s case, the transition from the 20s to 40s is portrayed rather unconvincingly. That would have taken up only a bit of production planning. Pity.

The chemistry between Sushant and Shraddha leaves something to be desired. Their exchanges seem contrived – hardly natural. The rest of the 7 guys who reunite in their 40s one does find engaging. Much of the structure is only ‘formulaic’ .A fixed ‘3 Idiots ‘template. Though it has its moments, the film appears to drag on. A shorter run time would not have hurt.

The film relies on flashbacks. There is regular switching between two different timelines. That is something rather difficult to achieve. Tiwari, however, makes the transition from the 20s to 40s (and back) seamless. The ‘winning-losing trope’ is successfully juxtaposed upon the depiction of a young man struggling between life and death – with Sushant’s character as the torn Father. The film tries to carry over college life-lessons regarding ‘winning-losing’ into the Father’s son. The son attempts suicide, having failed to learn much from the Father’s experience. Sushant’s character tries to link with the others – as with Shraddha’ character. The audience is giving the Chhichhore Movie Review

Enjoy The Comedy of Chhichore Movie

While the two main protagonists struggle with their emotions, the film shows the futility of trying to teach the younger generation the lessons learned 20 years earlier. Today’s young (personified in Sushant’s son) are hard to teach. Their life goes over the edge, because of this lack of empathy with the parents. It is small comfort to delve into the past and hang out on reunions. The re-imagined hostel days seem rather too boisterous. Meanwhile, the attempter of the suicide struggles for his body and mind. Sushant is highly convincing in the hostel days portrayal. As the Father, however, he should have put in more work. All in all, a mixed fare. Watch it, but try to not compare it with ‘3 Idiots’.