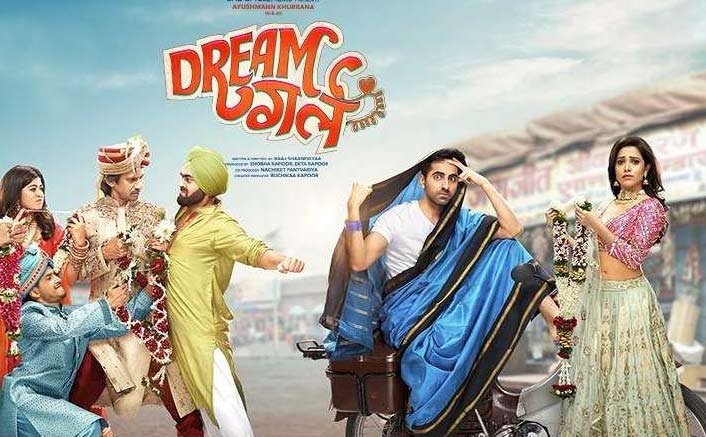 Dream Girl is Hindi-language romantic comedy-drama film, released today Friday, September 13th 2019 and presenting by Ayushmann Khurrana and Nushrat Bharucha as a lead role. This movie is directed and written by Raaj Shaandilyaa and Ekta Kapoor is the co-producer under their Balaji Motion Pictures. We have brought the Dream girl movie review here so you can decide you want to go to watch this movie.

The principal photography began on December 2018, while Nushrat completed her part of shooting in January 2018. Also the first look of poster of the movie was released on 3rd December 2018 in which Aayushmann was wearing a sari. Ahmed Khan did the choreography in this movie. Balaji Motion Picture released the official trailer on 12 August’ 2019.

· Aayushmann Khurrana as Lokesh Bist and Pooja (fake girl), a girl who attracts many people’s by her seductive voice.

· Vijay Raaz as an inspector.

· After a long time Ritesh Deshmukh (As special appearance in song “Dhagala Lagali”.

Here Aayushmann plays the role of men who have the unique ability to talk in an attractive female voice. In the trailer, we can see Aayushmaan starts with the role of Sita in a Ramayan stage play. This character also gave him the confidence to go ahead with his female voice and later he decided to start a job at the call centre. His fictional character Pooja with the men becomes quite hit by his creamy talking skills and mesmerising voice.

As the Nushrat who is playing the role of his beloved gets irritated at one point as she strikes by a man asking for Pooja. Also, Nushrat’s brother also falls in love with the Dream girl Pooja. So the Total movie will give you a comedy shots.

Aayushmann Khurrana is one actor who always chose the film by his mind instinct, not like others who chooses the films, which work at the box-office. This movie script also hit his mind and he got ready for it. Dreamgirl movie is a brilliant comedy of errors with an extraordinary device of playing the character of a woman with a man. You may have seen in any other movie but seeing Aayushmann’s acting is another fun. Nushrat also completed her shooting earlier in January 2019.