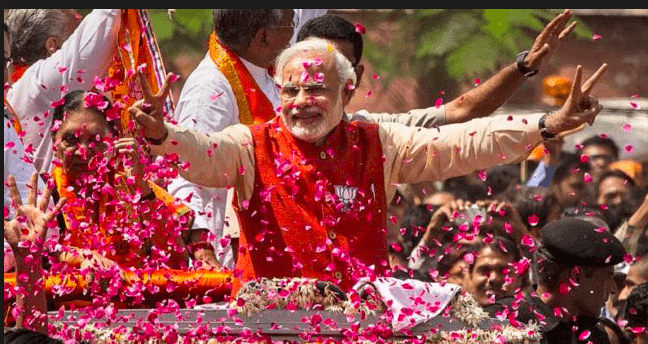 As we all know that Prime Minister Narendra Modi has attained huge votes in the election of 2019 and won the tag of Prime Minister again. It is natural due to his big decisions which he took for India. He always paid attention to the Indian public and implemented many beneficial decisions that were good for India.

People have given a tag of Singham Returns after the victory of BJP in the Election of 2019. Once again Modi has embarked to take the responsibility of India. He will now start planning again to give unforgettable improvements and schemes due to that India can grow up.

Watch Video Narendra Modi after the Victory of BJP

Modi is a great leader and with this victory, BJP-lead NDA has become a first non-COngress party that returned again in the government. Modi the Prime Minister of India has proved that he is the only leader who can take forward to India at growth level.

Just Watch Video of Rahul Gandhi After Failure in Election 2019

Do you ever thing that Rahul Gandhi deserve to be India Prime Minister? We can assume the answer would be a big “NO” from all over the direction of the Indian public. And also it has been proved in the election of 2019 that public of India only wanted to see Prime Minister Narendra Modi as future Prime Minister of India.

Smriti Irani got victory over the Rahul Gandhi in his own Garh Amethi. Also, Smriti Irani has become A Star Performer in the election of 2019. Indeed she is a powerful lady and after her victory she thanked to Amethi public.

This is the data of State Uttar Pradesh where BJP got 63 seats out of total 80 setas.

The data of West Bengal where Minster of India and BJP got 18 seats out of total 42 major seats. It’s a sign that how much Mamta Banerjee loves to her public in her state.

The state Rajasthan, where BJP got all 25 seats as there was no-one who could have defeat Prime Minister Narendra Modi.

So this is the data and graph how BJP and Indian Prime Minister Narendra Modi won the election of 2019 India.