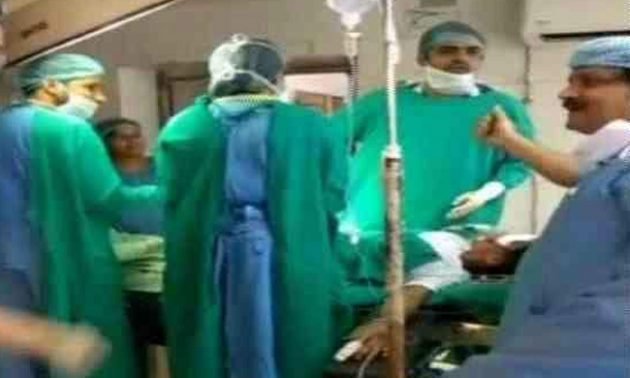 Two senior doctors in Jodhpur’s Umaid Hospital were removed after they were purportedly seen in a video fighting inside an operation theatre during surgery on a woman on Tuesday.

The video, shot by nursing staff and accessed through hospital sources, showed assistant professor of obstetrics and gynecology Dr. Ashok Nanival – who is seen operating on a patient – arguing with the professor of anesthesia Dr. Mathura Lal Tak using filthy language. The identity of the two doctors was confirmed by the hospital, which also ordered a probe.

The state government ordered a probe. Subsequently, the Rajasthan high court ordered the Jodhpur district collector to include Jodhpur metropolitan chief judicial magistrate in the probe panel formed by the state.

Following the high court’s order, the Rajasthan Legal Services Authority in its report told the bench the woman on the operating table when the purported video was shot was Naseem Bano, who delivered a healthy baby girl. However, another woman, Anita, was also in the operation theatre for a C-Section, also delivered a girl who died after birth.

In fact, the superintendent of the hospital, Ranjana Desai, said the woman was brought in a critical condition and was immediately shifted to the operation theatre for a C-section. She lost her baby soon afterward. “We are yet to ascertain if the newborn’s death was because of the spat. The cause of death is severe birth asphyxia,” she said. The two doctors who were removed did not take calls.

As the video purportedly showed the two doctors shouting at each other, warning them to keep their language in check and sparring over what appears to be an ego clash.

Dr. Amilal Bhat, the principal of Dr. SN Medical College and controller of Umaid hospital, said the two doctors were removed immediately after the issue was reported to him. “I recommended disciplinary action against the two to the government and formed an inquiry committee for further probe,”

On Tuesday evening, state’s medical education department terminated the services of Dr. Nanival as an assistant professor and reverted him to the position of medical officer (MO) in the medical and health department. For action against Dr. Tak, the medical college wrote to the department of personnel.

“Dr. Nanival was appointed an assistant professor on the urgent/ temporary basis. The medical education department has to power to terminate such appointments. For Dr. Tak, who is a senior professor, the action will be taken by the DOP,” Dr. Bhat said.

The probe panel is headed by Dr. Desai and comprises the head of anesthesia Prof UD Sharma and pediatrician Dr. Rakesh Jora as members.

“We recorded statements of everyone present in the OT during the spat until 1 AM Tuesday night and is preparing a report to submit to the principal,” Desai said.